Learn To GET RICH WHILE BLACK... Without Being an Athlete, Entertainer or Drug Dealer

This book is the only known book on Black wealth building that takes into account the racial discrimination that exists in this country.

Article and Exclusive Interview With Chuck Starks On "Get Rich While Black... Without Being An Athlete, Entertainer or Drug Dealer"
Chuck Starks, Inc. 500 Award Winning Entrepreneur (CEO), has written a book that every Black American should read. Racial discrimination in America has changed the way Black People must see themselves and their options to becoming financially wealthy.

This book is a must-read for anyone who aspires to live an abundant life with more than enough money to spend, live well, give and leave a robust inheritance to heirs.  Black Americans have literally built this Country yet have not been able, because of discrimination, to reap the benefits of their labor without taking major risks that jeopardize not only their health but their life, family and legacy.

Very few Black Americans have the ability to play professional sports, act, model or entertain at a star level and get rich. Anyone can sell drugs or commit crimes but we all know how that story ends – prison or death (or both).

Article & Exclusive Interview On Get Rich While Black...
Without Being An Athlete, Entertainer or Drug Dealer Continues Below
Now, with the knowledge gained from this very informative book, Black Americans will be able to win in the game of life by playing by the easy to follow concepts contained within.  No longer will Black Americans have to risk everything on their looks, talent, luck, or connections to create great wealth.

Every Black American should read this book ... over and over again.  Ready, Set, Get Rich!!!

The book is available on Amazon, BarnesandNoble.com, and virtually anywhere books are sold.
Exclusive Interview With Chuck Starks

Kamau: Can you tell us a little about your background and where you grew up?

Chuck: I was born in Fresno, California and raised in Sacramento. My father was a construction worker and my mother cleaned houses. My parents never divorced and were at home daily other than when my father traveled for business.

The area in Sacramento in lived in was a chicken farming town and our family was one of maybe 5 Black families in the whole town. We always owned our home, but we were poor compared to the many rich White farmers.


I went from kindergarten through college with no more than 1 other Black person in any class except P.E and music.

Kamau: What inspired you to go into business?

Chuck - Since I grew up with the children of very wealthy farmers, I got to see what it was like to be rich. Of course not all of the White families were rich, but I hung around mostly the rich kids.

They liked me and I liked them. I saw their homes, most with swimming pools, their new cars and trucks and they always seemed to have a lot of money.

I wanted that lifestyle and I was going to either be a rock star or successful business owner. I played in bands since I was about 13 years-old.

I started my first business at 20 years-old, managing a band and started my computer business, ComputerTech Integrators, Inc. (INC. 500 Winner) in 1980 and was a millionaire, on paper and lifestyle, at 34 years-old.

Kamau: What were your biggest obstacles in acquiring wealth?

Chuck: The lack of foundational money and racism. White preference meaning most Americans would rather do business with white people including some Black people.

You might review the Bloomberg Report in the Financial News, January 26, 2016, titled, “Federal Reserve Report: Black People are not likely to become Millionaires” (Google it).

The reason for the disparity can only be RACISM.

Kamau: Can you give us a 2 or 3 tips on becoming wealthy?

Chuck:
Kamau: How can your book help people acquire wealth?

Chuck: This book is the only book I know of that takes into account racism. I have read many books on wealth creation and without systemic racism they might work.

Black people must approach wealth building knowing that at any moment you can lose your job, be demoted or fired, and must create multiple income streams that allow them to make money all the time (even when they sleep).

And, Black people must leave an inheritance to their family.

After reading my book, Black people will be able to make a plan what will allow them to make more than enough money in a time frame of their choosing.

I really believe that any Black person in American can become rich.

Chuck: I love all people (even though I don't like some) and integrity. I hate racism and poverty. Poverty causes people to lose their humanity.

As James Baldwin said, "I want to be an honest man". 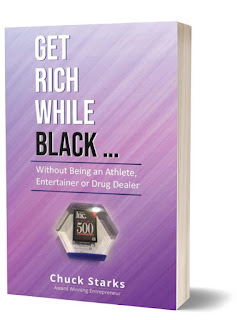 The book is available on Amazon, BarnesandNoble.com, and virtually anywhere books are sold. See comments on book review at end of  this news blog web page.
-------

Posted by Dadpreneur Productions at 7:51 PM

Email ThisBlogThis!Share to TwitterShare to FacebookShare to Pinterest
Labels: Entertainer or Drug Dealer, Get Rich While Black... Without Being An Athlete